Coinnest, one of the largest Bitcoin exchanges in South Korea has announced that it will be shutting down following a litany of administrative, financial and legal issues.

In a statement published on the company’s website on Thursday (April 18, 2019), the platform announced its decision to shut up shop. Coinnest had already terminated account creation features as early as Tuesday (April 16, 2019).

Following the decision to shut down, the platform says it will stop trading and deposit services at the end of April 2019. Customers will have until the last day of June 2019 to withdraw crypto held in the company’s wallets. 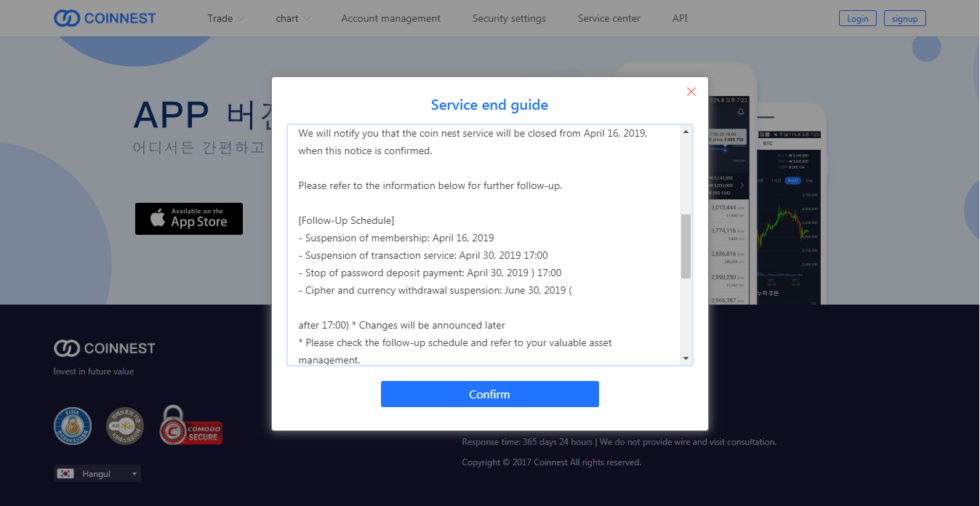 Coinnest also announced a lowering of withdrawal fees, as well as the minimum withdrawal amount to enable the process to go on smoothly. The platform warned users that it will not process any withdrawals after June 30, 2019.

This news of the Coinnest shutdown rounds up what has most likely been a miserable year for the beleaguered exchange. Back in April 2018, Bitcoinist reported the arrest of the company’s CEO for fraud and embezzlement.

Kim Ik-hwan, the arrested CEO was subsequently found guilty and sent to prison with a $2.5 million fine. At the start of the year, an airdrop went bad also cost Coinnest about $5 million further worsening the company’s liquidity problems.

The Coinnest shutdown comes closely on the heels of reports that three of the “big four” South Korean Bitcoin exchanges recorded losses in 2018. The prolonged bear market of 2018 which saw cryptocurrency plummet massively caused significant dents in the revenue earned by these platforms.

According to Business Korea, only Upbit earned profits for 2018 with Bithumb, Coinone, and Korbit all reporting net losses. Upbit spent some portion of 2018 under scrutiny from regulators and law enforcement in South Korea with the company eventually forced to reduce the number of tokens traded on its platform.

This decision perhaps helped shield Upbit from the negative impact of the bear market. Upbit reported a profit of more than $87 million.

Bithumb, on the other hand, incurred a net loss greater than that reported by Coinone and Korbit combined. Financial results published by the BTCKorea.com, operators of the platform, Bithumb suffered a net loss of $180.65 million.

End-of-year financials for both Coinone and Korbit show losses of $5 million and $40 million respectively.