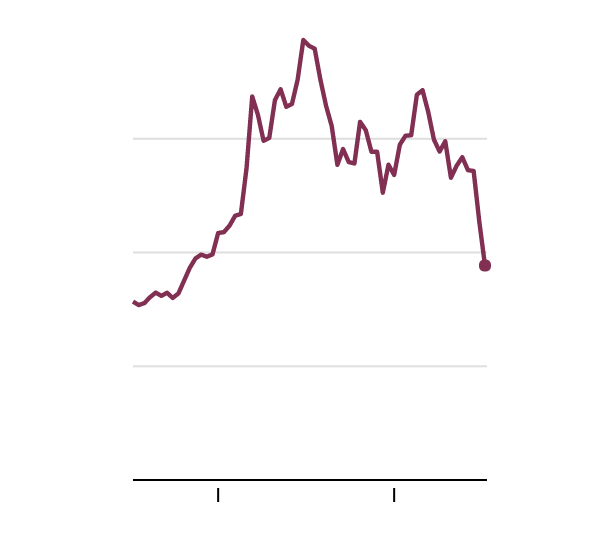 SAN FRANCISCO — The air has been swiftly leaking out of the virtual currency bubble.

A decline in virtual currency prices that began before Christmas has picked up pace in recent days as concern has grown that governments could crack down on the new industry.

For a time on Wednesday, the price of Bitcoin dipped below $10,000 — taking it down to about half what it was at its peak last month.

Other virtual currencies have been falling even faster. Ripple, which was briefly second in value after Bitcoin, has lost more than two-thirds of its value from the high it hit early this month.

The falling prices have been serious enough to prompt online posts with suicide hotlinesfor virtual currency investors in despair.

The declines are likely to be particularly painful for people who took out debt to buy virtual currencies at high prices. Even the lows hit on Wednesday are still well up — some 1,000 percent — from where Bitcoin began 2017. But that is little comfort for the people who purchased late last year.

One person on Reddit wrote about persuading family members to buy digital tokens late in 2017 and regretting it.

“Fast forward to today,” the user, going by the screen name PM_ME_UR_ROOM_VIEW, wrote. “I opened my phone and I find a barrage of messages from them accusing me of scamming them and tricking them into crypto because they lost money, I tried to explain to them that this is normal and it will bounce back soon and it’s just a correction and don’t sell but they aren’t listening.”

For skeptics of virtual currencies, the falling prices have provided some vindication.

“Most people are buying Bitcoin, not because of a belief in its future as a global currency, but because they expect it to rise in value,” a note from economists at Capital Economics said on Wednesday. “Accordingly, it has all the hallmarks of a classic speculative bubble, which we expect to burst.”

The pessimism in recent days has been fed by several reports that governments around the world were planning to tighten the reins on virtual currency trading.

South Korean officials have said they were contemplating shutting down the virtual currency exchanges that have popped up over the past year. South Korea has seen the most frenzied surge of ordinary investors throwing their savings into Bitcoin and other digital tokens.

The Chinese government has already shut down exchanges in China, but it was recently reported to be taking even further measures against new forms of online trading as well as Bitcoin mining operations in the country.

Regulators in the United States have continued to crack down on smaller virtual currencies like Bitconnect, which has been described as a Ponzi scheme by many in the industry.

Bitcoin, which began in 2009, has been through these sorts of wild swings before. The price spiked in late 2013 to above $1,000, before moves by the Chinese government sent the price sliding. It was only last year that the price again recovered to the same levels.

Since that recovery, an array of virtual currencies have been on a nearly uninterrupted tear. With Bitcoin, investors have been betting that it could be a new kind of asset, outside the control of any government, something like digital gold.

Investors have also been putting money into newer virtual currencies like Ethereum and Ripple, which were designed to do more sophisticated types of transactions than Bitcoin.