As Bitcoin battles to reach $9,000, Fundstrat Head Analyst Tom Lee says that the real FOMO will kick in when Bitcoin reaches $10,000.

Perma-bull and Fundstrat head analyst Tom Lee has said that the “real FOMO” will ramp up once Bitcoin overtakes the $10,000 milestone.

Lee made the statement in response to a tweet by Financial Times journalist Adam Samson. Samson claimed that in his opinion Bitcoin is headed toward ‘level 10 FOMO’ and he referenced a Fundstrat graphic suggesting level 5 FOMO will be triggered when Bitcoin retakes $8,900 and that this is “equivalent to achieving $3,200 in 2017.”

Previously, Lee also predicted that the price will hit $10,000 sometime this year. 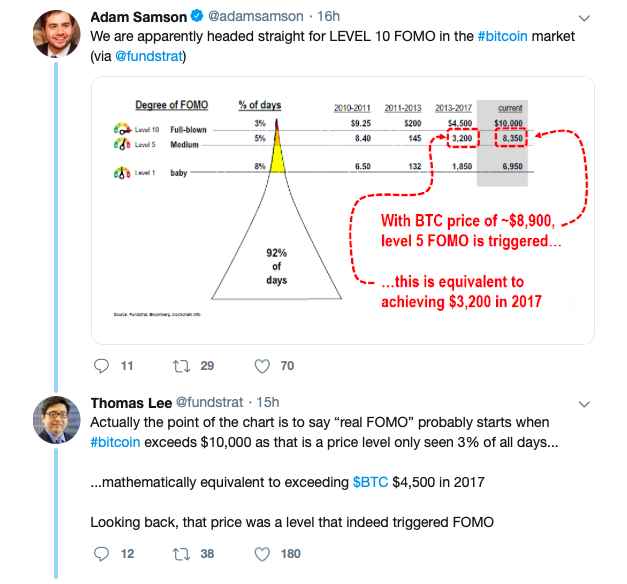 The graphic is part of a Fundstrat study which categorized the FOMO levels of the Bitcoin market from 1 to 10 and according to the graphic a higher price represents investors growing sentiment that Bitcoin price is on the verge of adding significant value.

According to Fundstrat BTC’s recent move above $6,950 triggered the ‘baby’ level of FOMO and investors began to cautiously invest in the digital asset. Once Bitcoin broke above the $8,340 resistance a “medium” level of FOMO began.

In his tweet, Lee clarified that the “real FOMO” that will start when BTC/USD surpasses $10,000 is “a price level only seen 3% of all days [and] mathematically equivalent to exceeding $BTC $4,500 in 2017.” While Lee’s assessment is exciting, not everyone in the crypto community was convinced.

A number of Twitter users tweeted doubts about Lee’s ‘false equivalency’ and a few countered that Bitcoin FOMO won’t reach a peak until the top cryptocurrency overtakes the previous all-time high as this will be the “psychological point where all tourists will think the Bitcoin thing has legs.” 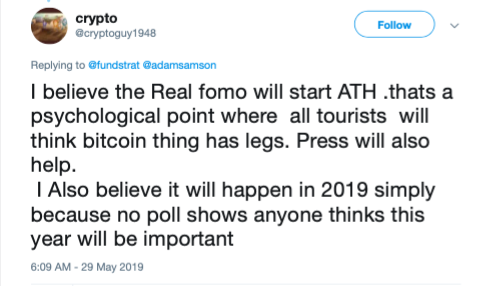 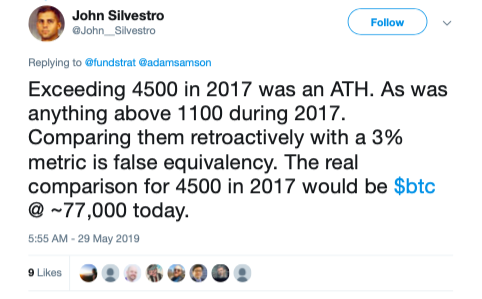 Silvestro claimed that the retroactive comparison of the two periods is a “false equivalency” and he suggests that a more accurate comparison for 2017’s all-time high would be $77,000 Bitcoin today.

While the conversation makes good fodder for table chat, investors long on the digita asset are convinced that as Bitcoin’s price continues to increase so will the level of investor FOMO and the at the moment the general consensus is that the upcoming halving event will bring Bitcoin to new all-time highs.

Currently, the digital asset is consolidating and struggling to stay above $8,750 which many analysts say is a crucial price to maintain in order for Bitcoin to make another run at $9,000.