Bitcoin price returned to its bullish trend May 1 as it followed fresh gains in altcoin markets to jump 3 percent in 24 hours.

Bitcoin Price At $5.3k Across Exchanges

Data from cryptocurrency exchange Bitstamp, which offers one of the more conservative Bitcoin price 00 indices, put BTC/USD at around $5310 at press time Wednesday.

The pair had fallen as low as $5066 over the past week, sudden losses occurring April 26 as news over fresh problems for stablecoin Tether and associated exchange Bitfinex hit the market.

Bitfinex, which is currently in the process of rebutting legal accusations it attempted to hide losses of $850 million in 2018, meanwhile offers dramatically higher asks for Bitcoin this week.

While the majority of exchanges post a Bitcoin price of around $5310, at press time, the ‘premium’ for Bitfinex traders had reached more than $300 – $5624 per bitcoin. 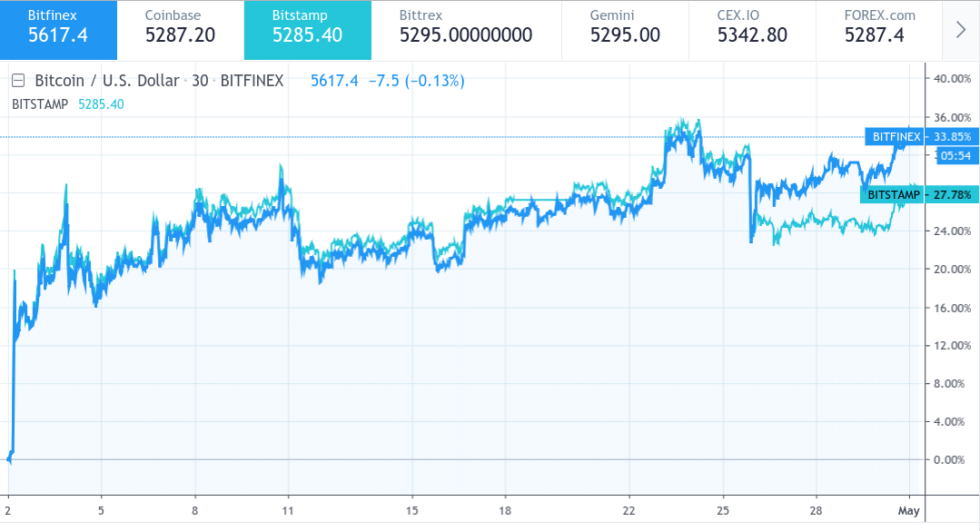 The phenomenon had developed over several days, social media commentators noting its presence over the period following the platform’s latest legal debacle.

Bitcoin’s performance nonetheless marks a return to form for the cryptocurrency, which already had proponents eyeing a potential end to its longest-ever bear market cycle.

Beginning in December 2017, Bitcoin price hit its subsequent low of $3130 in December last year, while 2019 has set a highly optimistic tone.

As Bitcoinist reported, prior to last week’s slump, some of the community’s best-known figures had publicly stated they were up to 95 percent certain that BTC/USD would not fall below $3000 again.

This week, they were joined by fellow Bitcoin bull Tom Lee, who judged the market’s reaction to Bitfinex as potential proof of its newfound bullish resilience.

“If this tether…  story broke in mid- to late-2018, the crypto market would probably (have) seen panic liquidations across the board,” he wrote on Twitter Tuesday. “Another sign crypto winter is ending?… I think so[.]”

Lee was continuing a mood he set in a research piece for his market strategy firm Fundstrat Global Advisors last week, in which analysts highlighted eleven signs which tend to occur only in a bull market.

The lack of market reaction to Bitfinex, he argued, could even serve as a twelfth reason.

…But as each week has progressed, evidence mounts new bull market is underway—when will consensus reach that ‘tipping point?’