Bitcoin price fell $400 in minutes April 3 but broadly held onto support above $5000 as the enthusiasm from this week’s bull run continues.

The gains, which began earlier this week when bitcoin suddenly jumped from $4170 to $5000, mean Thursday saw the highest bitcoin price since November 18 last year.

With its latest surge, bitcoin has definitively recovered from the event, reattaining its pre-fork levels for the first time.

At press time, BTC/USD was hovering around $5010 on Bitstamp, having bounced through $5000 once again after briefly falling to $4880. 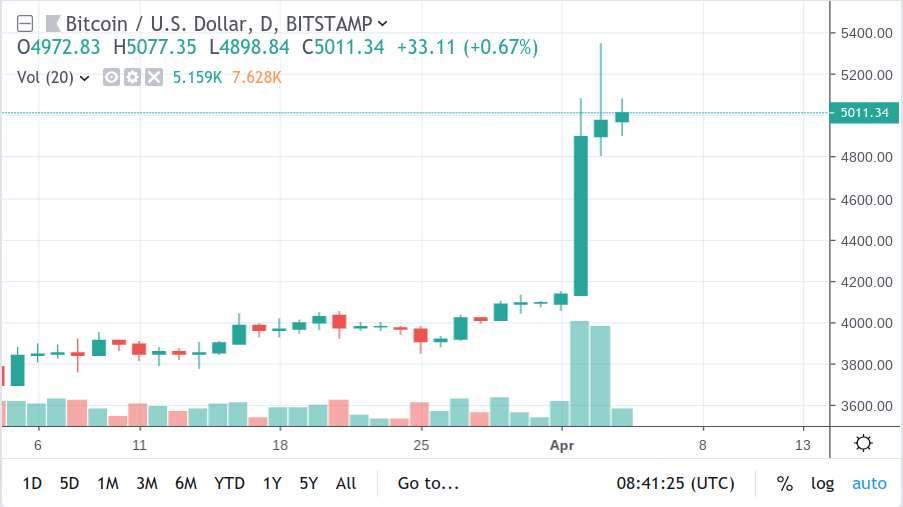 As Bitcoinist reported, the industry is currently undecided as to the cause of the most successful day for the Bitcoin price in more than a year.

As our in-house analyst Filb Filb previously noted, technical indicators were predicting a bullish advance prior to the fact, while others speculated that managed exchange orders were influencing market demand.

At the same time, the relative longevity of the bull run – with the Bitcoin price holding at higher levels more than just a matter of hours – further complicates the situation for analysts.

Nonetheless, some things remain the same. The price run came alongside huge increase in interest from conventional markets, with Google Trends and its equivalents proving that price means appeal for the mainstream.

Others were predictably more bullish still, with Twitter trading analyst known as Vortex reiterating his belief Bitcoin would usurp all other forms of value to emerge as a dominant force.

“The market has assigned a value to (Bitcoin),” he wrote April 2.

With its fixed supply it’s only a matter of time before BTC sucks in all value like a black hole.

A ‘flippening’ of mainstream habits to favor Bitcoin over fiat-based alternatives further formed the topic of a comprehensive report by software company DataLight this week.

As Bitcoinist reported, the research followed Twitter CEO Jack Dorsey in announcing that within ten years, Bitcoin would beat out competition as a global currency. Specifically, Visa, MasterCard and PayPal would all give way to the cryptocurrency, should current development continue.