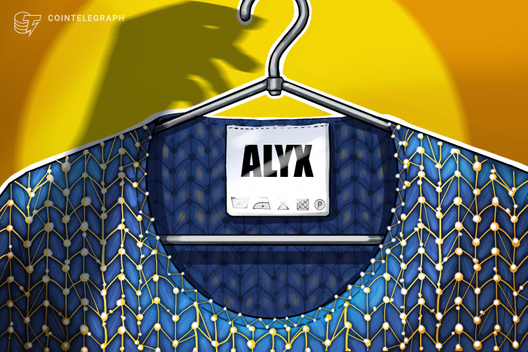 Per the report, Iota’s system will be implemented in partnership with global manufacturing company Avery Dennison to allow Alyx’s customers to have full insight into their supply chain. By scanning QR codes with an app, it will reportedly be possible to track the course traveled by the item from its creation to the point of sale.

The Block claims that data concerning the apparel’s production location, date and raw materials will be stored on Iota’s DLT, allowing users to consult it. Debbie Shakespeare, senior director of sustainability and compliance at Avery Dennison, reportedly commented:

“Brands and consumers can know that the information they are being shown about the garment’s creation process is 100% accurate and can be trusted implicitly.”

According to fashion news outlet GQ, Alyx creative director Matthew Williams explained that the brand puts a strong emphasis on sustainability by using recycled materials and, for instance, a leather dying process which consumes CO2. Lastly, he announced:

“We’re taking it a step further: we’re going to be the first brand to introduce blockchain technology this month in Copenhagen.”

As Cointelegraph reported in March, luxury scotch whiskey brand Ailsa Bay is reportedly about to release what it believes to be the world’s first scotch whiskey tracked with a blockchain-based system.

In February, Russia’s Ministry of Education and Science also introduced a blockchain-enabled platform for tracking diamonds.