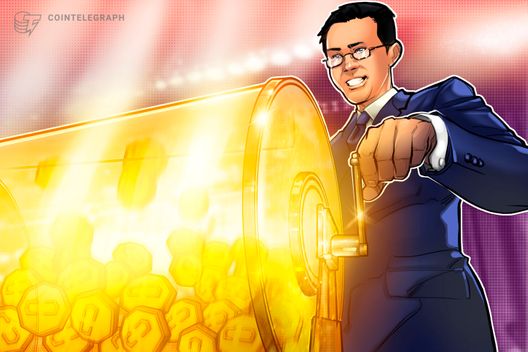 Despite the changing attitude toward altcoins and initial coin offerings (ICO) on the whole, Launchpad — the token offering platform developed by the world’s leading cryptocurrency exchange Binance — is selling out of its offerings in a matter of minutes. With the firm now concluding a series of sold-out token launches, the company divided opinions when it announced changes to the structure of its platform. Cointelegraph takes a look at the changes to the service, along with the latest Binance token offering news and developments.

On March 24, prominent cryptocurrency exchange Binance published a post laying out fundamental changes to the structure of its Launchpad token sale platform.

The company had previously used a first-come, first-served system that resulted in long waiting lists and some investors missing out on tokens. According to the press release, the company will now use a lottery-style format for its future token sales on Launchpad.

As per the press release, the new system will focus around a lottery ticket initiative in which service users will be able to claim a maximum of five tickets by holding a certain amount of Binance Coin (BNB) over the 20-day period preceding the lottery. Users are allocated one ticket per 100 BNB held, up until the maximum of five tickets is reached. The minimum amount of 100 BNB necessary to take part in the lottery currently sets the investment threshold at $1,700. According to the company, users will be able to choose how many tickets they want to enter into the lottery 24 hours before the winners are selected. The maximum number is chosen based on their BNB holdings over the 20 day period prior to the lottery event.

It appears that the change in format stems from a multitude of factors, varying from customer demand to efforts to make the process more fair. Although the company did not specify what specific demands customers had requested, or whether or not they were experiencing a change in clientele, a spokesperson for Binance Launchpad spoke to Cointelegraph about the rationale behind the changes:

“In a fast-changing world, we listen, learn and adapt. We created a new lottery format for Binance Launchpad because we are prioritizing for fairness, transparency and a better user experience.”

Despite increased investor skepticism of the usefulness of ICOs in general, Binance claims to be experiencing an increase in its token sale participants, citing figures released by founder and CEO Changpeng Zhao (aka CZ):

Although the figures appear to suggest that Binance’s appeal for ICOs is undimmed, the changes to Launchpad’s format drew sharp criticism from members of the crypto community, with many saying that the changes would price out small investors. Investors and crypto enthusiasts alike took to Twitter to voice their concerns over what implications the new format could have:

I think I will no more participate in #TokenSales on Binance Launchpad, unless Binance remove the new rules.

One complain tho, minimum BNB holding balance is about worth $1500 and tbvh @cz_binance ,that’s more than entrie portfolio of 75% of people in crypto.

As it became clear that the new format was experiencing a mixed reception at best, CZ engaged with a number of Twitter users to try to gauge what might be more palatable to the widest range of potential investors:

Will address some of the questions/concerns/feedback in this thread.

Our new Launchpad model is not set in stone. It’s the result of multiple detailed discussions over the weekend, while considering all angles. We will consider suggestions and will make certain tweaks. https://t.co/2wfeyZUyZH

In the thread, CZ addressed the most commonly mentioned issues and suggestions, stating that the “Launchpad model is not set in stone. It’s the result of multiple detailed discussions over the weekend, while considering all angles. We will consider suggestions and will make certain tweaks.”

The main concerns fall into two categories. The first issue that critics were swift to point out is that the proposed system appeared to favor “whales” — i.e. individuals or entities that hold a large number of cryptocurrency — and was in danger of pricing out smaller investors unable to hold 100 BNB. CZ pointed out that, while it would be possible to lower the threshold, this would consequently reduce the percentage chance of winning and could result in dissatisfaction with the service. Many critics suggested a “magic number” of 50 BNB. While CZ admitted that the threshold could potentially be a mistake, he did stress that the core demand remained very high for Launchpad and that limiting the minimum amount does not represent a quick solution to the problem.

The second issue concerned whales creating several accounts in order to gain additional tickets, thereby maximizing their chances of being selected. In addition to information in the press release stating that all due diligence and Know Your Customer (KYC) measures would still apply as usual, CZ stated that all measures to prevent this from happening were both strong and already in place:

There is strong KYC and anti-fake KYC measures in place already, which we think should be adequate to address the problem.

The CEO also made sure to point out that people should only take part in Launchpad token sales if they are in a financially stable position and can factor in the losses that they may potentially suffer. Likewise, in the press release announcing the changes published on March 24, the company stated that entry into the lottery does not guarantee winning and that fluctuations of BNB’s price were likely:

“BNB price will fluctuate during the 20 day period. If BNB price drops, it is entirely possible the drop in BNB price will outweigh any gains made by the new token. That is first assuming you win in the lottery draw. Further, the new token being sold is not guaranteed to increase in price. It may drop in price. There are significant risks. You are responsible for your own decisions.”

When Cointelegraph questioned a spokesperson for Binance Launchpad about whether the platform was experiencing a shift toward larger investors, the company declined to comment but gave a short response regarding criticism of the new format:

“As CZ tweeted recently about Launchpad, we take suggestions into careful consideration, and will make certain adjustments based on the feedback we receive.”

In recent months Binance Launchpad completed a number of high-profile token sales. Demand is clearly high for coin launches, with many of the token sales completed in a matter of minutes. Most recently, the company completed a $4 million sale of Celer Network (CELR) tokens. Celer Network is a layer-2 scaling platform that works to enable off-chain transactions for payment transactions and off-chain smart contracts.

On Feb. 25, Binance Launchpad completed the sale of Fetch.AI (FET) tokens, reaching a total of $6 million, with over 69 million tokens sold. According to a tweet published by CZ, the sale was completed in just 22 seconds.

Fetch.AI is a project that seeks to establish an “economic internet” by combining machine learning, multi-agent systems, intelligent smart contracts, distributed ledger technology and artificial intelligence.  FET’s initial coin offering was set to close once the $6 million hard cap was reached or on March 3. According to a tweet published by CZ, the sale was oversubscribed, leading to a bottleneck on the exchange:

As per a Binance blog post published on Feb. 25, the tokens were, in fact, sold to participants in less than 11 minutes and 14 seconds. The extension in the initially reported time is allegedly the result of taking into account the processing time for submitted buy orders.

Binance also concluded the sale of Tron-based BitTorrent token (BTT) on Jan. 28, bringing in a total of $7.1 million dollars and a total sale of 50 billion tokens in less than 15 minutes. BitTorrent is a peer-to-peer file-sharing platform that allows service users to share files such as music or videos via the internet.

Unlike the sale of the FET and CELR tokens, the BTT launch consisted of two simultaneous sessions, with one for buyers purchasing with BNB and another for buyers using Tron (TRX). According to information posted on the Binance website, each token was priced at $0.00012 at press time.

Tron CEO and founder Justin Sun confirmed the successful sale of the tokens in a tweet after the launch had been completed:

Despite the success of the sale and its seemingly short duration, CZ tweeted that the launch could have concluded much faster were it not for some unexpected technical issues relating to the sheer level of demand for the product:

“Both sessions concluded. Took about 18 minutes, due to a system issue, would have taken 18 seconds otherwise. Demand was astronomical.”

With several lucrative ICOs under its belt, Binance Launchpad’s success has not gone unnoticed. Singapore-based cryptocurrency exchange Huobi Global announced on March 20 the launch of its own platform for prerelease token sales in a blog post.

The platform, officially named Huobi Prime, will give investors the change to access new altcoins before they appear publicly on the most prominent exchanges. The services will be powered by Huobi Token. According to Leon Li, founder and CEO of Huobi Group, the new service stems from customer demand and has been designed “from the ground up to be a more innovative, direct and responsive way to access up and coming new tokens.”

According to information published in the Medium post, all coins purchased through Huobi Prime are immediately deposited into users accounts. The company also states that a “rigorous screening and selection process” has been put in place, citing the importance of a progressive business model, financial backing, community support, reputation, technical innovation and expertise in aspiring projects.

Listings on Huobi Prime are set to involve three 30-minute rounds of coin offerings, with prices capped but rising over time. While the group states that Huobi Prime is open to all types of investor, the blog post states that individual purchases cannot surpass a $1,000 USD equivalent in Huobi Tokens.

In order to take part in future token sales, users need a verified account and an average monthly holding of at least 500 Huobi Tokens. The company said that the limit was put in place to try to strike a balance between larger- and smaller-scale investors, in addition to ensuring legitimate usership. The company notes, however, that the limitation will be waived for the first coin launch.

Regarding the fresh competition from companies attempting to launch their own coin offering platforms, Binance Launchpad remained optimistic, stating that they are confident its products and user experience will guarantee high standards:

“Many IEOs are popping up on other exchanges, so we anticipate new formats and systems. Binance Launchpad will always uphold the highest standards for token launches; we select the highest quality projects and seek to provide the best user experience.”

The first coin to launch on Huobi Prime will be TOP, the native token of TOP Network’s public blockchain project.