Sky’s the limit for Bitcoin, whose market capitalization could reach $100 trillion when looking at the historic trends of the US dollar and the world’s most popular cryptocurrency side by side.

Dollar’s Inflation is a Feature

April Fools Day aside, the only predictable thing about the US Dollar is that its purchasing power will continue to drop.

Since 1913, the year the Federal Reserve was established, the dollar has lost over 96 percent of its value. 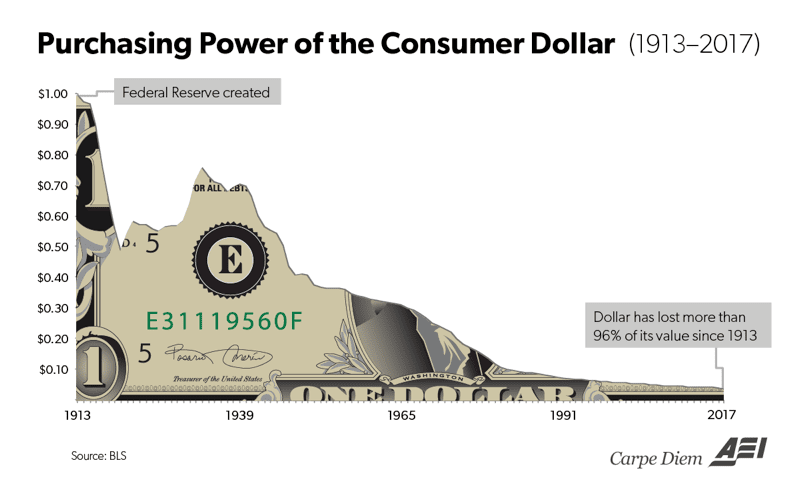 Overall, prices in 2016 were 2,324 percent higher than average prices in 1913, according to the Bureau of Labor Statistics consumer price index. In other words, the world’s reserve currency experienced an average annual inflation rate of 3.14% over the last century.

What’s more, other fiat currencies, particularly in developing economies have fared much worse. Some like the Algerian Dinar, for example, have lost roughly 80 percent against the USD in the past 5 years alone.

Since the dollar is inherently designed to lose value over time, keeping your hard-earned money in fiat currency abolutely guarantees that at least 3 percent of your wealth will evaporate every year.

Bitcoin is the lifeboat. ?‍♂️

When Bitcoin first launched in 2009 as a response to the financial crisis, it was considered a pipe dream for it to reach $1 dollar per bitcoin.

Miraculously, it only took BTC 2 years to reach parity. This happened 7 years ago on February 9th, 2011 on the doomed Mt. Gox platform, which was pretty much the only exchange at the time.

This was the period of the infamous ‘bitcoin pizza‘ and some of the comments from this era seem quite amusing today. For example, one trader wrote:

I didn’t have faith in BTC back in February, and now it’s trading at almost $30.

Others’ FOMO was even more palpable. 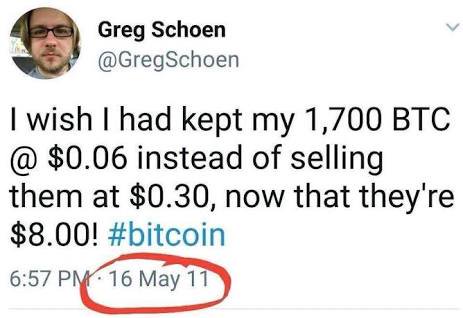 Meanwhile, savy traders had much lower time-preference, for which they have been greatly rewarded in the following years as prices saw three, four and even five-figure sums.

It is these percipient investors who found the risk and reward ratio to be too attractive. They knew that there would only ever be 21 million bitcoin. On the other hand, the supply of dollars in the world is in the tens of trillions and ever-expanding.

What’s more, this doesn’t even take into account the derivatives market, which is estimated at more than 10 times of the total world’s GDP. This largely unregulated sector is actually considered to be one of the biggest risks to the global economy and could comprise a staggering $1.2 quadrillion USD.

Comparing Bitcoin valuation to tulips, the dot-com bubble and other market phenomenon is akin to jamming a square peg into a round hole.

Its supply is set in stone at 21 million. It is digitally scarce. Its emission rate is predetermined. Its accounting is transparent and publicly verifiable. It’s not a commodity since it doesn’t follow supply and demand (which could explain its volatility). Yet it’s also not a currency or legal tender as it’s outside purview of any government or central authority.

Bitcoin is unlike anything the world has ever seen. It is ‘Money 2.0’ that has appreciated over 84,000 percent against the US dollar over the past 7 years. 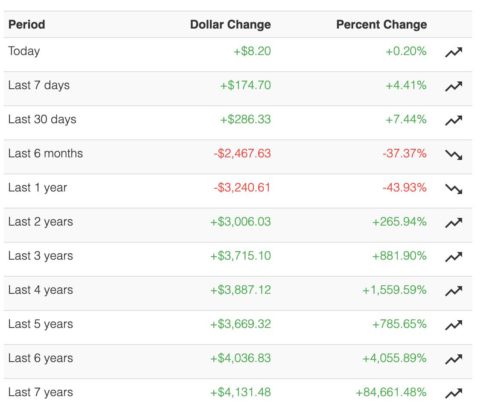 Hence, it is no wonder that it is gaining a foothold in countries with capital controls like Venezuela where money is now virtually worthless. But developed nations will also soon realize that Bitcoin is alive and well despite the hundreds of obituaries in the press.

At the same time, despite crashing against the dollar multiple times throughout its history, BTC always recovers to post higher lows.

Therefore, perhaps we stop looking at the crash from $20,000. Instead, it may be time to start looking at the historic yearly lows, which reveal an interesting trend indeed.

Bitcoin is a Black Hole for Fiat

Today, interest rates are at historic lows. The Federal Reserve and other central banks have shown that they will continue to not only print more money to prop up the financial system, but are also open to negative interest rates as well.

Therefore, the question remains is when — not if — all this newly created money will trigger hyperinflation.

Bitcoin, on the other hand, continues to mine blocks and confirm transactions 24/7 with an uptime of 99.983 percent in its ten years of existence. At the same time, almost 85 percent of all bitcoin have already been mined.

With BTC price now once again forming a bottom pattern, the trend appears to be in tact. In fact, the US dollar has already dropped 10 percent in value against bitcoin in Q1 2019.

Stocks and bonds have also rallied in the first quarter of this year as central Banks have pumped almost $1 trillion in liquidity into global markets, notes market analyst Holger Zschaepitz.

Bitcoin market analyst planB, though, believes the trend is obvious. He believes that Quantative Easing (QE) means bitcoin will eventually hit a market cap of $100 trillion as the dollar ‘prints’ up its price.

As Bitcoinist reported, the analyst recently shared a new model that puts Bitcoin at a $1 trillion dollar market cap some time in 2020 after the May halving. The event will also mark the start of the period when Bitcoin’s inflation rate will drop below 2 percent, i.e. the Federal Reserve’s inflation target.

Source: Not April Fools: Why the US Dollar Will ‘Print’ Bitcoin to $100 Trillion